As we follow the story of the Datatron from its origins within Consolidated Engineering Corporation, through its initial sales under ElectroData Corporation and into the Burroughs organization, one interesting name keeps showing up: Sibyl Rock.  She is always looking out for the customer, the programmer and the user.  She deals comfortably with customers, engineers, technicians and management.  Just who was Sibyl Rock? 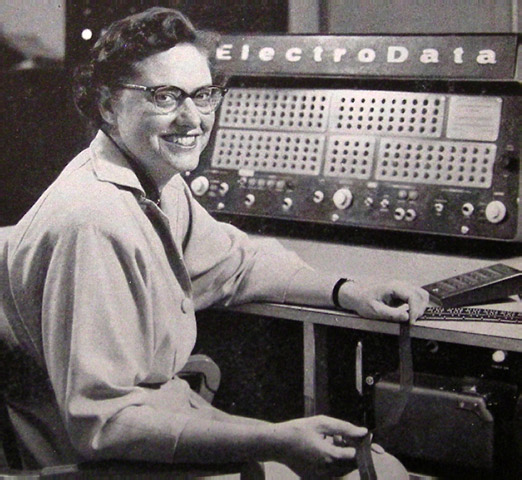 Born on August 1, 1909 in Butte, Montana, she grew up there and in Denver and in Los Angeles.  Her father was a telephone technician in Montana and Colorado and that may have helped form some interest in technology.  She attended UCLA where she completed her degree in Mathematics in 1931.  She was president of the local chapter of Pi Mu Epsilon, the national mathematics society.  She also picked up her Phi Beta Kappa key along the way.

Sibyl Rock joined United Geophysical Company in 1938.  She later transferred into United's engineering and instrument subsidiary, Consolidated Engineering as they began to develop the Mass Spectrometer.  Rock's work there in the 1940s was significant enough to deserve a mention among those planning a 2002 presentation at the American Society for Mass Spectrometry.  She was instrumental in developing the mathematical techniques for analyzing the results from Mass Spectrometers and assisting Consolidated's customers in the use those techniques and the use of Cliff Berry's analog computer.  Rock devised many of the procedures of mixture analysis and wrote the computing manuals.  She did basic analysis, under the direction of the National Bureau of Standards, of the first smog samples.  She was officially in research until 1947 and then in sales.  This put her in close contact with the decision makers at various chemical and refining companies who would later be purchasing some of the first digital computers.

With Cliff Berry staying behind in the key Mass Spectrometry business at Consolidated, Sibyl Rock was transferred into CEC's newly formed computer department in 1952.  In early 1953, she was introduced by L. P. Robinson at a meeting with this title:

During the initial phases she is in charge of sales and application functions of the Computer Division, with the title “Acting Manager, Application Service”

But it wouldn't be going too far, in my opinion, to suggest that during the first two years of the project, Sibyl Rock was the Market Research, Marketing and Sales arms of CEC/ElectroData.  Just a few of her contributions:

Rock also owns the distinction of authoring the first letter to the editor published in Edmund Berkeley's Computers and Automation.  In Volume 2, number 1 published in January of 1953, Rock wrote, "Would it be possible for you to include a calendar covering, say the following four to six months, which would list the technical meetings of interest to those in the computer field?"  C&A began doing this with the next issue.  Her letter extended to note that there were now too many technical meetings and that a strong organization was needed.  She later would help found the Los Angeles branch of the ACM (Association for Computing Machinery.)

In later years with Burroughs, Rock maintained her unique position between the customer and the computer designer.  She once described her role as follows:

For the past several years I have written Product Specifications for digital computers and related peripheral gear.  The engineering design is done by engineers.  The Product Specification forms a "contract" between engineering and marketing to assure that both interested parties know what is to be built.  Because the engineer may be too optimistic as to what he can produce and what reliability he can achieve, and because marketing wants the moon for zero dollars, the product specification writer is needed as a negotiator.

In advocating on the customer's behalf about a cumbersome design feature on a proposed Burroughs printer in 1964, she wrote:

Whenever our past procedures have been more difficult than IBM's we have been at a disadvantage.

I submit that our experience tells us that operational and performance features known to be inferior to IBM's present designs should not be permitted on our future units.